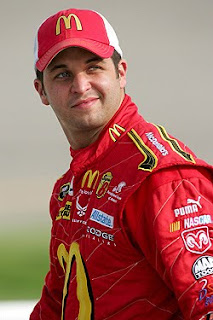 So the US economy is basically in shambles, everybody and their brother is getting laid off, and retail spaces are closing left and right.

But amid all the dire fiscal news this year, there’s one group of folks that you’d think would have it made in the paycheck department–NASCAR Sprint Cup drivers.
That’s why I was rather surprised to read the news snippet on Jayski today, which revealed that Reed Sorenson is driving for Richard Petty Motorsports for the rest of the season–for nothin’! Yup, call it fallout from the Petty/Yates merger or the best deal a team owner ever got, but poor old Sorenson is racing each weekend for FREE.
When faced with the veritable Sophie’s Choice of keeping a ride with no salary or losing a ride with no salary, Sorenson chose to keep racing–for the exposure alone. Suffice it to say, such a deal would probably ONLY work in NASCAR. I can’t imagine a pro ball player of any sort, be it foot, base or basket, agreeing to play for free. Those cats strike every chance they get.
But such an ultimatum also wouldn’t fly in my workaday world. I don’t know of anyone in corporate, blue collar or political America who would show up every day for no pay (unless they were independently wealthy or on par with Mother Theresa).
So you gotta give Reed props. The guy just wants to race. However, Sorenson’s raw deal leaves me wondering. What if he wins a race for RPM? For his sake, I hope The King springs for a profit-sharing plan.

Shannon Spake Gets Extra Help in the Pits