Rockin' the All-Star Vote — A Little Help for Race Fans 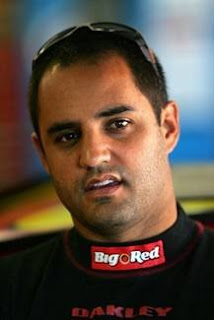 Political party affiliations be damned. This week, NASCAR fans have a much more complicated vote to cast–namely, to decide which Sprint Cup driver is All-Star worthy.

We only have until Saturday at 7:30 p.m. to cast our vote for who’s in. So to help the indecisive among us, I’ve put together a short little voting guide for the 10 drivers who are currently leading the fan vote. And if this isn’t enough, check out a search engine like Ask.com and type in the names of your pick. We fans need all the help we can get!

AJ Allmendinger: He’s the king of shameless self-promotion and he unabashedly begs for votes every time a TV camera crosses his path. He’s got one top five and two top 10 finishes this season. Plus, he races for The King Richard Petty, so what more needs to be said?

Bill Elliott: Awesome Bill from Dawsonville has long been a NASCAR all-star. With 44 career Cup wins, this old-school vet may be a bit long in the tooth…but he can still lay down a fast lap. Because of his past career successes, Elliott gets my vote, hands down.

Joey Logano: Boy Wonder has two top 10 finishes this season. But winning Rookie of the Year should be enough accolades for this kid. Making him an all-star so early on is definitely putting the cart before the horse.

Jamie McMurray: He’s a guy that race day pundits usually pick as a sleeper to contend for the win. But so far in ’09 he hasn’t been able to pull it off. In fact, McMurray hasn’t won a Cup race since 2007. But things could be worse–at least the #26 team has three top 10s to their credit this season.

Juan Pablo Montoya: He takes no guff and he cuts no slack. Plus, the off chance that Montoya might start a fist fight on the track is reason enough to cast your vote for the #42. If you need numbers, he’s got three top 10 finishes this year.

David Ragan: Ragan scored his first Nationwide win this season, but he has yet to take the checkered flag in Sprint Cup (his best finish thus far is a top 10). Still, there’s something about Ragan that’s intensely likeable. Maybe it’s his Unadilla accent.

David Reutimann: A pleasant surprise in the early going and a huge boon to MWR. As they say, Reutimann is The Franchise. With four top 10 finishes and one top five, surely Reutimann will pull out a win before Homestead.

Eliott Sadler: I love ol’ Elliott, but I just can’t get past his near crying jag when he realized he was going to lose this year’s Daytona 500. It was almost as uncomfortable as watching Gilles tear up on Dancing With the Stars. But then again, he does have a top five and a top 10 finish.

Martin Truex Jr.: Any driver that can last an entire race whilst suffering from a kidney stone deserves your admiration and arguably your vote. Plus, he’s finished in the top 10 three times this year. Martin’s a man among boys.

Michael Waltrip: Where do I begin? He wrecks almost every time he touches the track (and usually more than once per race). But then again, he sure is funny. If it’s entertainment you seek, then by all means vote Waltrip. Besides, he has managed to eke out one top 10 finish.

Headed to the All-Star Race? Try Some Sweet Tea From Junior (Johnson, That Is)