There are two things race fans should remember to pack before heading to future races at Atlanta Motor Speedway – earplugs and cash.

First, the racing at Atlanta is fast and loud – and if you don’t have protective earwear, sitting through the race is going to be tough/borderline impossible.  I tried it and then grew worried that I might develop a certain degree of permanent auditory damage.

Second, the concession stands don’t accept credit/debit cards, so be sure you take enough cash to purchase food and drinks. If not, you’ll have to find an ATM and then wait in line to use it, or else beg an obliging tailgater for a spare morsel or two.

I learned both of those lessons early on Sunday.  But other than that, Atlanta is a great place to watch a race. I don’t think there’s a bad seat in the grandstands – and for a girl who’se used to the behemoth venues of Daytona and Talladega, I appreciated the all inclusive sightline.

I also enjoyed the pre-race hours in the garage, meandering down pit road and hanging out in the infield for driver introductions.  And though I love NASCAR, the day’s highlight for was getting a close-up look at the gold medals of the United States’ Men’s Bobsled Olympic champs.  Photos below: 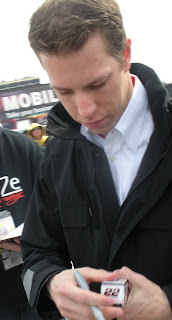 Driver of the No. 12, Brad Keselowski signs autographs for fans on his way to the driver’s meeting.  Little did he know he’d be sent on a high-flying wreck fest in a few hours by this guy: 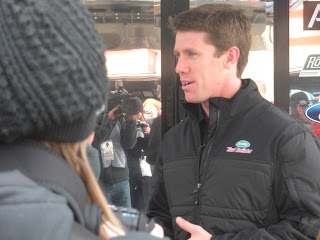 A calm Carl Edwards is interviewed in the garage area before the race.  He wasn’t so calm a while later. 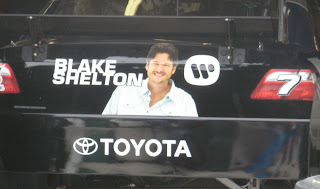 Country music star Blake Shelton and Robby Gordon’s car both hit the wall in the beginning laps of the Kobalt Tools 500. 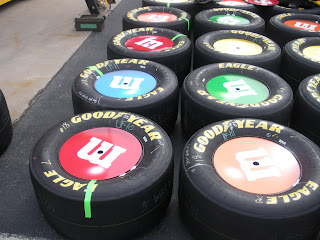 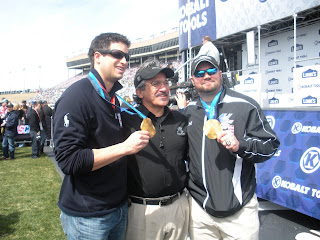 Olympic gold medalists in the men’s bobsled – Steve Mesler and Steven Holcomb pose for photos back stage at driver introductions.  I asked Mesler if his was a real gold medal or just a fake one he used for events like this.  He assured me it was the real deal! 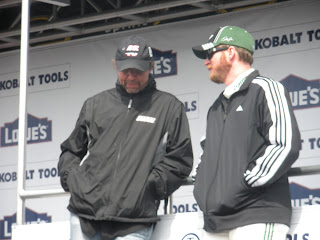 Dale Earnhardt Jr. handed Kyle Petty a big check Sunday morning for $1 million. The generous donation will go to Petty’s Victory Junction camp.  Before they took the stage however, the two spent a few minutes chatting.  From what I could hear of their conversation, it sounded like Kyle Petty was telling a racing story.  I would have liked to hear the whole thing, but it would’ve been ill-mannered to tell him to speak up… 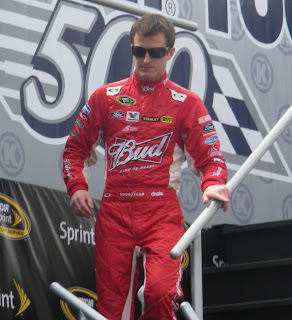 Catching Up With Joey Logano

Headed to Bristol? There's an App for That