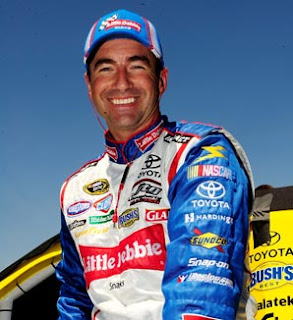 That’s the word that best describes the state of Richard Petty Motorsports in 2010.

It was a tough year for The King and those in his employ.  They went from four cars to two.  Lost their primo driver.  And they suffered through layoffs and cutbacks in the process.

But there is one bright spot on what has lately been a dim horizon – and that’s the 100-watt smile of Marcos Ambrose.

Ambrose will drive the No. 9 Ford for RPM next season.  He takes the wheel from Aric Almirola, who drove the car when Kasey Kahne made a late-season jump to Red Bull Racing.

And Ambrose’s infectious personality and determination to succeed may be just the shot in the arm the organization needs to regain momentum.

“I feel like I’ve got all the ingredients I need,” Ambrose told the Associated Press in August. “I wanted to eliminate any question marks about the stuff around me and people around me.”

Time will tell if the racer from down under can top the five-time champ.

But one thing is certain – Richard Petty Motorsports is back in the game.

The Tenth NASCAR Day of Christmas: 10 Years of Harvick