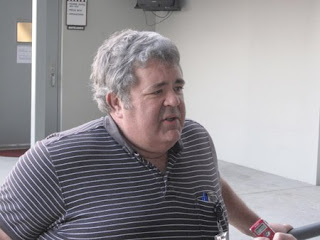 Agree with him or no, you’ve got to respect a guy like Monte Dutton. Dutton, who has been covering NASCAR since 1993, is one of the few journalists who can rightly be called an eyewitness to NASCAR history. And, when it comes to putting today’s NASCAR into context, this historian is no revisionist.

His assessments of the sport are blunt. His belief in the NASCAR party line often skeptical. But his journalistic candor is well-earned and, you could say, a logical result of his firsthand view of the sport’s evolution.

“Most of the people who do what I do originally didn’t know much about it, they were signed by a newspaper, and they know all about it now. But they don’t have the perspective,” Dutton said. “The first race I ever went to was at Bristol when I was seven years old. A Jarrett won – Ned Jarrett.”

Witnessing the ascendance of more than one Jarrett into racing’s upper echelon is just one of the changes Dutton has seen over the years. Most notably, Dutton has watched NASCAR enact myriad rules in an attempt to officiate the ever-changing sport. Yet as any student of the sport’s past will tell you, some of the tight controls which are now the norm have led to some negative consequences.

Take the generic look of the race cars, for instance.

“When I first started covering races in 1993, I remember marveling when I was driving to a race that the rarest thing you’d ever see would be a Ford with a Dale Earnhardt sticker or a Chevy with a Bill Elliott sticker,” Monte said. “Well now they’re all Hondas. And I think that NASCAR is sort of insulting fans in trying to tell them the decal of a headlight is the difference between a Ford and a Chevy.”

Dutton’s comments bring to mind the lyrics of an old David Lee Murphy song about a barmaid who spent her time breaking up fights over Chevys and Fords. Yet today’s fans are more likely to get into fights over Kyle Busch and Dale Earnhardt Jr. than the make of their favorite driver’s car.

“Now NASCAR will say ‘Well, it’s the driver now. Brand loyalty’s not as important,’ ” explained Dutton. “Well they pretty much destroyed brand loyalty. It was their own concerted attempt to do that, by gradually making the cars more and more alike.”

Dutton said the equalization of cars started in the late 1980s because the Fords had an advantage aerodynamically. So, to even out the racing, NASCAR allowed Chevys and Pontiacs to put window glass in the back. This decision snowballed into the more generic-looking cars seen by fans today. And less innovaton in the garage.

“Gradually over time, it became where teams, instead of relying on their own ingenuity, began relying on NASCAR to solve all their problems, and NASCAR was only too happy to oblige, but I don’t think it’s for the good.” Dutton said. “They’ve just systematically undermined it (brand loyalty). There still is brand loyalty, but it’s not what it was. And it’s hurt the manufacturers too.”

Ironically, NASCAR’s current economic woes may lead to a return to greater brand identity, including modifications to the sheet metal on the cars. Talk about coming full circle.

“I think it might be about to happen, because NASCAR never does anything unless you hit ‘em in the pocketbook and they’ve done all kind of things now because attendance and TV ratings are going down,” Dutton said. “They’re losing money so they’re rethinking all these things.”

NASCAR-ista note: Thanks to Monte Dutton for taking the time on a busy race day to do the interview and for David Cohea of NASCAR This Week for setting things up and contributing photos. In addition to covering NASCAR for the Gaston Gazette, Dutton moonlights as a singer/songwriter. Check out his music on Facebook and MySpace.

Too Sick for Smoke