Kahne Not the Only Sonoma Surprise 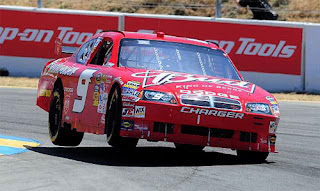 When Kasey Kahne beat Tony Stewart to the punch on multiple late-race restarts, he surprised every fan, broadcaster and vintner in Sonoma. But Kahne’s admittedly unexpected victory wasn’t the only shocker on Sunday. There were a few more drivers who put on a decent outing at Infineon, despite the low expectations of pre-race pundits.

Rookie Joey Logano wheeled his Home Depot Toyota like a road course vet, moving deftly in and out of traffic and keeping his car clean for the majority of the race. By and large, Logano looked more lively than ringers like Scott Speed and Ron Fellows. But his day ended badly with some contact on the track and he left Sonoma with a 19th place finish–not indicative of the way he ran all day.
Dale Earnhardt Jr is usually so little of a threat at road courses that Direct TV didn’t even broadcast his radio chatter this week. (The Junior Hot Pass channel is typically a race day staple). Running in the top 10 toward the end of the race, it looked like Junior was going to astound the NASCAR world with one his best finishes of the year. And then he was dive-bombed by Carl Edwards which effectively put the kibosh on a promising run.
Eliott Sadler managed to leave Cali with a top 10 finish–his first since the Daytona 500. Thankfully, Sadler had nothing to cry about this Sunday.
And AJ Allmendinger gave Richard Petty Motorsports the icing on the cake with his seventh-place run–and his third top 10 of the season. With Kahne in Victory Lane and AJ showing so strongly, Father’s Day sure was kind to The King.