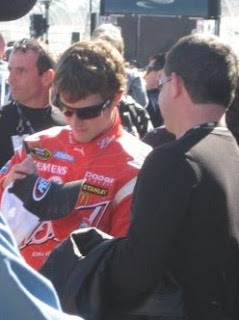 You may think it’s a bit early for silly season – but don’t tell that to Kasey Kahne.

News broke today that Kahne will leave Richard Petty Motorsports at the end of 2010. And the early word is that he’ll join Hendrick Motorsports in 2012, as the driver of the No. 5 car.

Which begs a couple questions.

First, what’s Kahne going to do in in that pesky year between 2010 and 2012?  The speculation has begun, with most folks opining that Kasey will take his curly-headed good looks over to the tough guys at Stewart-Haas Racing for 2011.  This theory makes sense given that SHR is, for all intents and purposes, practically an extension of the powerhouse that is HMS.

Second question – does this mean NASCAR fans have just one more year to cheer on Mark Martin?  Martin hardly seems ready to  replace his race car with a rocking chair.  However, Martin has already almost retired before.  Maybe he’s finally ready to hang up his firesuit.

OR will Kahne not take the No. 5 car at all?  There have been online rumblings that ever since Gordon found himself in the family way, he has decided against racing into his dotage. It sure would be something if Gordon was the driver to exit HMS instead.

One thing’s for certain.  If Kahne wants to fit in at HMS, he’s going to have to try to grow a beard. 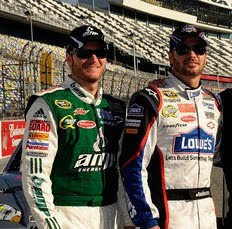 A Weekend for the Good Guys

Martin Integral In Naming His Successor