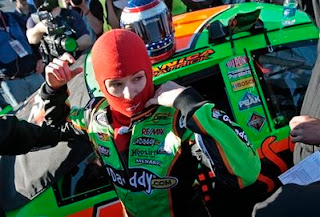 Psst … I have a confession to make.

Despite the papparazzi-like coverage of her ascendance into NASCAR, her GoDaddy commercials of questionable taste and those body-baring photos which pepper the ‘net, I might like Danica Patrick after all.

This was not the case as I entered the Daytona infield Saturday. Even while watching her No. 7 car roll past me on its way to the starting grid, I felt coldly indifferent in regard to Patrick’s fate. After all, how could she possiblly live up to all that hype? Surely there were other female ARCA drivers (like Leilani Munter or fellow Floridian Alli Owens) who better deserved my respect and attention.

But Danica? I just expected her to hang in the back, get caught up in an early pileup, and hop out of the car to a mediocre finish.

I never expected I would actually start cheering for her.

But that’s what happened. From my perch in the grandstands, I watched Danica hold her own at full speed, avoid the ARCA wreckfest and pull off a save in the tri-oval that would make even an inveterate Patrick-hater nod with grudging respect.

I guess there’s something about seeing a fellow chick not “wussing out” that made me actually start applauding each time she drove by.

And I wasn’t alone. Fans of all ilk and affiliation seated nearby jumped to their feet as she slid through the grass and hooted and hollered as she wheeled it back onto the frontstretch. And, as Patrick rolled onto pit road at race’s end, she was treated to a standing ovation for her sixth place finish.

Danica passed the ARCA test. But, more importantly, she passed the fan test.

Given her debut, today’s announcement that she has decided to run the Nationwide season opener this Saturday is no surprise. Sure, running with the Nationwide crowd will be bring a whole new level of challenges, but you gotta love a girl who’s not afraid to play with the boys.

“Racing in the Nationwide Series race was my goal during this entire two-month preparation process, but we wanted to make sure it was the right thing to do,” Patrick said today. “The ARCA race was a blast, and I’m not ready for my first Daytona Speedweeks to end just yet. I want more racing.”

A Few Sights From the Bud Shootout